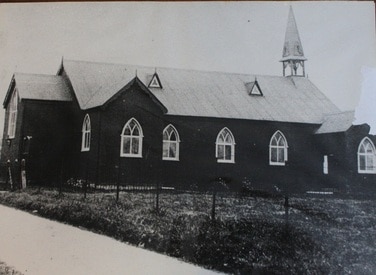 A Mission Church of iron and wood was licensed in 1904 and was used until 1957 when it was declared unsafe and demolished. Between 1957 and 1963 Church services were held in the Village Room in Wickhurst Lane.

The present Church of St John (Apostle and Evangelist) was dedicated by the Bishop of Chichester, Dr Roger Wilson on November 2nd 1963.

The architect of the new church was James Ralph. The building is basically of a steel structure and lined with wood. It is essentially tent-shaped, reflecting the “Tent of Meeting” often referred to in the Old Testament.

Its dominant structure stands for Majesty and the Power of God and yet it is a small intimate building in which the people of God can meet together in fellowship.
The New Hall is a timber-framed building which was generously funded by members and local and worldwide partners.  It was opened in September 2008 by Bishop Lindsay Urwin. 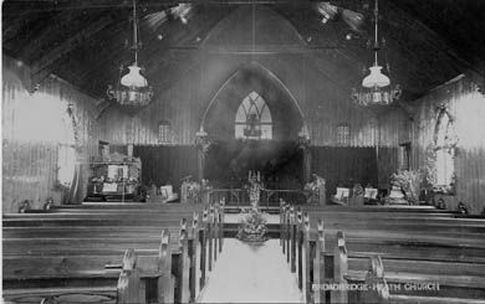 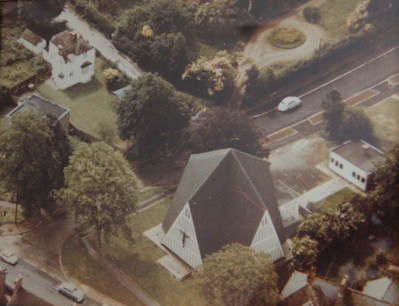 St John’s within the Parish of Horsham

For many years, St John’s was part of the Parish of Horsham in the Diocese of Chichester and the Horsham Rural Deanery. The Horsham Parish consisted of five, then four, Churches representing a range of church traditions: St Leonards, Holy Trinity, St Mary’s and St John’s, each served by its own stipendiary Vicar, with the Team Rector based at St Mary’s in the centre of Horsham.  Horsham Parish now consists of 3 churches.

In November 2019, we became an independent benefice and parish to be officially known as ‘The Benefice and Parish of Broadbridge Heath, in the district of Horsham, an the diocese of Chichester’ – simply known as St John’s BBH for most day-to-day purposes. We are enjoying serving our parish as well as maintaining close links with the other churches in Horsham.

In August 2021 Broadbridge Heath PCC was registered as a Charity with the Charity Commission. Charity number: 1195316

You can find out more about which cookies we are using or switch them off in settings.

This website uses cookies so that we can provide you with the best user experience possible. Cookie information is stored in your browser and performs functions such as recognising you when you return to our website and helping our team to understand which sections of the website you find most interesting and useful.

Strictly Necessary Cookie should be enabled at all times so that we can save your preferences for cookie settings.

If you disable this cookie, we will not be able to save your preferences. This means that every time you visit this website you will need to enable or disable cookies again.